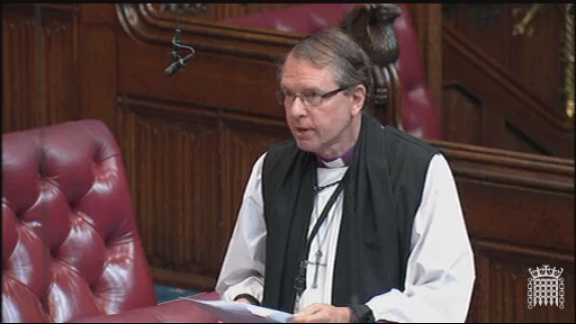 Bishop Paul, today Thursday 26th June made a speech to the House of Lords during the debate Preventing & addressing the abuse of children/vulnerable adults. Standing to make his speech at 16:04pm, Bishop Paul outlined the reasons why he is calling for a Independent Public Enquiry on the matter.

The full prepared speech given in parts to the House of Lords follows.

My Lords in my role as Co Chair of the Church of England and Methodist Church Joint Safeguarding Liaison Group and lead bishop for safeguarding I daily have issues regarding the abuse of children and adults at risk brought to my attention.

Clergy and other church leaders across the nation lead churches in which those who have been abused seek comfort, strength and healing. The staff of Church schools daily hear stories from the children they serve of abuse of all kinds.

We know that the horrors of abuse both of children and adults at risk are sadly daily reality for far far too many. We also know that the impact of abuse of all kinds is often lifelong.

In my maiden speech during the debate on the gracious speech I welcomed the Government’s courageous decision to strengthen the law on psychological and emotional abuse. For too long the horrors of systematic emotional abuse have been inadequately tackled and I welcome the proposal that lies as part of the Serious Crimes Bill. This adds to other areas where the law has been improved over recent years. The Care Act 2014 has moved us from ‘vulnerable adults’ to ‘adults at risk’ helping recognise that whilst some adults are permanently vulnerable because of, for instance age, illness or disability others become at risk for a period of time. This recognition is undoubtedly helpful. So too will be the statutory duty to have local Safeguarding Adult Boards.

So my Lords there are improvements that have already been made. The noble Baroness Howe’s Private Members Bill on Online Safety offers a further opportunity to help tackle the extremely serious issue of online abuse. I hope the Government will support the Bill. As the Prime Minister said on 22nd July 2013, the Government is determined to make the internet safer by “tackling the proliferation and accessibility of child abuse images on the internet.” Indeed the extension of the offence of extreme pornography to include possession of pornographic images of rape and assault by penetration in the Criminal Justice and Courts Bill, will continue to send a message to the public that such abuse is unacceptable. The situation becomes ever more concerning with the use of the Darknet too. CEOP must be supported adequately to stay ahead of the game, so that they can discover innovative ways to unmask the users of peadophile sites, and not be allowed to continually fall further behind.

The noble Lord Bichard concluding his outstanding enquiry of 2004 concluded thus, “The harsh reality is that if a sufficiently devious person is determined to work their evil, no one can guarantee they will be stopped. Our task is to make it as difficult as possible for them to succeed.”

It is with this in mind, and another key factor that I wish to raise a number of areas where I believe the Government, or future Governments, needs to act more decisively. The other key factor is that of listening to the voice of survivors. This has been the deepest lesson for me, and for the church as a whole, over recent years. We have previously failed to listen adequately to the survivors’ voice. We must do so if we are to continue to improve the prevention of abuse of both children and adults at risk.

Survivors have been calling for some years for the introduction of Mandatory Reporting by professionals. I believe that they are right to do so. Far too many cases of abuse could have been prevented if professional people who had serious suspicions of abuse were required to report it to a relevant authority. There remains too much fear of ‘whistle-blowing’ or being thought of as interfering. Mandatory reporting for professional staff would alleviate any doubts and prevent people from asking themselves ‘should I or shouldn’t I?’ Suspicions should not be brushed aside or go left unheeded. As Keir Starmer has made clear the time for Mandatory Reporting has arrived.

Survivors also note the need for really good Safe Spaces where those who have been abused can go to report their case, and find the kind of support that they need. The Church of England and the Methodist Church are currently exploring how we might create such safe spaces for those who have suffered abuse within a church context. We would fund these spaces but they would be independent of us. Projects like the Lantern Project on the Wirral, and small scale locally based survivor groups like those that have sprung up in Sussex in response to church based abuse cases in that area already do outstanding work. Graham Wilmer MBE has developed the very effective Unstructured Therapeutic Disclosure at the Lantern Project. Work like this for survivors of abuse needs to be encouraged and supported more openly.

A further matter survivors have been calling for is the extension of the definition of  ‘positions of trust’ in the Sexual Offences Act 2003. The current definition is too limited in scope. It should be  broadened to include all members of staff and volunteers in all organisations where parents and carers trust such individuals to provide activities, care or instruction to the most vulnerable either formally or informally.

Continued work is also required within the operation of the Criminal Justice system so that survivors and victims are enabled to share their stories in a supportive environment. For too long now children and victims of sexual assault have expressed the view that the process of being a victim or a witness within the Criminal Justice system is a traumatising experience, with their honesty being questioned, whilst at the same time making public the most sensitive aspects of their abuse. Many advances have been made using video evidence and the Crown Prosecution Service issuing new guidelines for handling child sexual abuse cases etc.. But vigilance and continued improvement is required.

Finally my Lords in listening to the voice of survivors one very strong message keeps being shared. It goes like this:- ‘You can do all you like to improve your legislation, your procedures and practices to ensure the present and the future are better at prevention and in dealing with both survivors and abusers than in the past but unless and until you face up to the reality of what has previously happened you will never really change the culture of abuse within which we live.’ In short, if we do not face up to past failures we will never really improve the future. This is a lesson we in the church are slowly learning and seeking to tackle. We have a very long way to go.

However the lessons of cases like Savile and Rochdale have highlighted that in our nation we have a long history of abuse within institutions. Schools, Residential Care Homes, Hospitals, the Police Force, Churches and local and national political institutions have all been used by abusers to hide their wicked activities. Powerful people have engaged in serious abuse and have worked with each other to create opportunities and share their vices and victims. As a nation we have to face up to the seriousness of institutionally based abused against the most vulnerable in our society, both children and adults, which has gone on in the past, and sadly is today as prevalent as ever. The survivors are right when they say that if we want the future to be truly different and better we have to confront the past. We must. I believe, as do many of my colleagues, that we need a fully independent enquiry that fully examines the reality of institutionally based abuse in our nation over the past 50 years. This is needed so that we can understand why this happens, where responsibilities sit and what cultural, societal and institutional discourses and dynamics lie at the heart of these ongoing failures. I know it will take time; I know it will be costly to undertake and I know that for both of these reasons it will be argued against. However I firmly believe that the true cost of child abuse and the abuse of adults at risk is far higher than any of us have ever been prepared to acknowledge in terms of the mental, emotional, social and physical health and well-being of very large numbers of our population. Justice, fairness and the very health of our society demands that we no longer hideaway from this dark part of our story. We need an Independent Public Enquiry and we need it very soon.